Gaenovium 2014: How about a video component?

DearREADERS,
Perhaps you've read reports earlier today about a true technology conference for genealogy technologists, not typical "end users" like Ol' Myrt and her DearREADERS. While there is frequently no substitute for attending a conference in person, I've got to question the technology side of this conference. My question is this - how about live streaming several sessions? I'd be willing to pay to attend virtually. (Psssst - I happen to know Google Hangouts on Air can be configured private and require payment to view.)

From Gaenovium.com's press release we read: 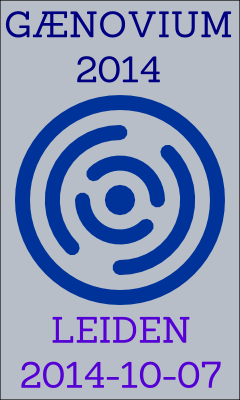 New genealogy-technology conference is different in every important way.

Quick SummaryNew conference is not big and overwhelming, but small an intimate. Independent organisation. Not national, but international. Not in the USA, but in Europe. Not for genealogy technology users, but the technology creators. Conference fee includes all-attendee dinner.

GaenoviumGaenovium is a new kind of genealogy-related conference conceived and created by genealogy technologists Bob Coret & Tamura Jones, and it's different in every important way.

Gaenovium isn't a big overwhelming conference, but a small and intimate one. Gaenovium does not take place in the USA, but in Europe, the continent where modern genealogy has its roots.

LocationGaenovium does not take place just anywhere in Europe. Gaenovium takes place in Leiden, an ancient Dutch city that is not only rich in history, historical buildings and fascinating museums of international renown, but also known to genealogist world-wide as the city of the Pilgrim Fathers.

Date and PricingGaenovium 2014 takes place on Tuesday 7 October 2014. The modest registration fee of € 45 includes coffee, lunch and a closing dinner with all speakers and attendees.

SponsorsGaenovium 2014 is sponsored by MyHeritage Ltd and RootsMagic Inc.RootsMagic CEO Bruce Buzbee is enthusiastic: “This brand new conference is an exciting initiative that we're proud to support as a sponsor.”