DearREADERS,
Things are getting mighty exciting when it comes to entertainment scheduled for RootsTech 2015. Today's email brings the announcement that Alex Boye and Quarter-Finalists from NBC's America's Got Talent  is Joining RootsTech 2015. Combine your love of music and love of family history research at RootsTech this coming year!

From our friends at RootsTech.org we read:


Popular musician and YouTube sensation Alex Boye is teaming up with the stars of his popular “Let It Go” YouTube cover the One Voice Children’s Choir to perform on the opening day of RootsTech, the world’s largest family history conference.

Known for taking popular songs and “Africanizing” them with African rhythms, voices, and instruments, Alex Boye has developed an impressive following through live concerts, musical collaborations (with artists including The Piano Guys, MC Hammer, and the Mormon Tabernacle Choir), and his thrilling and entertaining YouTube videos. His music videos on YouTube have been seen more than 100 million times combined.

Alex Boye’s most popular cover, “Let It Go” from Disney’s Frozen, has been seen more than 50 million times. On that song, he is joined by the One Voice Children’s Choir, and it is frequently listed as the best cover of that song.

The One Voice Children’s Choir, comprised of children ages 4 through 17, received national attention over the summer as quarter-finalists on the NBC hit show America’s Got Talent. Over the years, the choir has received numerous awards, including the prestigious John Lennon International Music Award, presented by Yoko Ono and George Martin, producer of the Beatles.


Join us on Thursday, February 12, 2015, at the RootsTech opening event with Alex Boye, featuring the One Voice Children’s Choir. 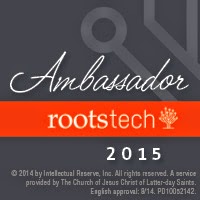 Posted by DearMYRTLE on Thursday, November 06, 2014