DearREADERS,
Thanks to +Thomas MacEntee for inspiring us with his 13 week Genealogy Do-Over. I've been following posts in the GDO Facebook page  and note that Thomas appears in the first 20 minutes or so of Mondays with Myrt yesterday to explain more about what the Genealogy Do-Over entails. It is there that we shared the following Genealogy Do-Over links:
MYRT'S COMMITTMENT

MYRT'S PROGRESS: Week#1
Rather than set aside all previous research, I'm working through my first two generations, where I've known the individuals per my quasi-Genealogy Do-Over comment above.


I've installed Folder Marker (the software to color code computer folders) http://foldermarker.com/index.php and cleaned up my maiden name folder. This is phenominal, since everything used to be thrown into that folder.

BEST PRACTICES - FILE FOLDER NAMING
There will be a SURNAME folder, with sub-folders for each generation in that direct line. In the sample below, you are looking at the contents of the PLAYER surname folder, where:
A look at my PLAYER Surname folder:


2011 Salt Lake City Cemetery (I have tombstone photos to sort into appropriate folders.)
PLAYER_Alma_Mary Elizabeth Wright
PLAYER_Charles_Betsey Oades
PLAYER_Glen
PLAYER_Pat
PLAYER_Shirl_Myrtle Weiser
PLAYER_William Warner_Zillah Saunders
PLAYER_Z_Unknown (for those with the PLAYER surname in the same locality and time period where I have not yet determined relationships if any.) 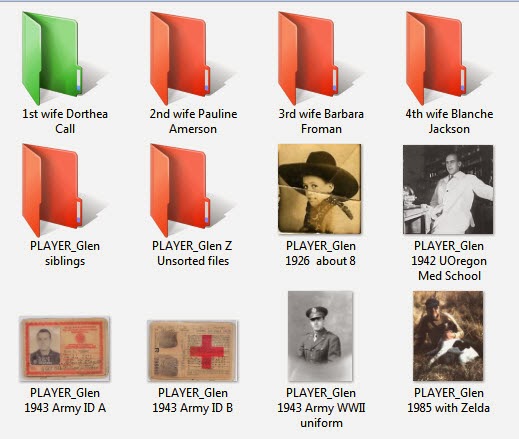 PLAYER_Glen Z Unsorted Files (in the image above) is where I place all the scanned images I collect, but have not yet renamed and attached to Glen Player. You can probably construe my naming system here.

This is my report.