DearREADERS,
Oh, the younger generation. Aren't they just awesome! Case in Point: Evan Rasmussen, who worked on his Eagle Scout Project this past week. The goal?

Digitize the tombstones at the Greenleaf Cemetery near his home and garner public support to transcribe the text from each stone using the BillionGraves website and app for iOS and Droid smartphones. Find out more about Evan's project in his guest post on his father's genealogy blog located here: http://bit.ly/Evan_Greenleaf 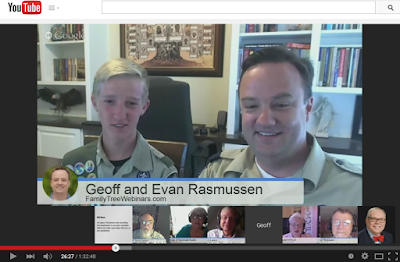 EVAN RASMUSSEN
This spry young scouter appeared as a guest today on Mondays with Myrt. He was joined by his father, Geoff Rasmussen, well known in the genealogy community for his work at www.LegacyFamilyTree.com and www.FamilyTreeWebinars.com. The first 27 minutes of the hangout involved a lively discussion about Evan's project. Tune in - you'll find Evan is a confident, well-composed young man, who speaks well for himself. (He's a third generation Eagle Scout, you know.) Here's the video, just press the play button in the middle of the screen below:


ONE PROUD POPPA
You can tell Geoff is mighty proud of his son simply by the expression on his face during this interview. Geoff writes:


"Evan is 15 years old and will be a sophomore in high school in the fall. He's been involved in scouting since his cub scout years which began at the age of 8. He earned the Arrow of Light award, and currently holds the rank of Life Scout. One of his first merit badges was the genealogy merit badge. Like his Dad, he enjoys basketball, his family, and doing family history and indexing.

Once at the cemetery, it took 20 people (members and leaders of Evan's troop, family, church and friends) about 45 minutes to photograph the 30 rows of headstones, which resulted in 687 pictures. After issuing the call for help, it took about 5 [four hours actually] hours to transcribe the photographs which resulted in about 900 indexed names. With the planning, organization, photographing, indexing, and reporting, the Eagle project took about 95 total man hours. Spreading the work out amongst hundreds around the world made the actual time a lot shorter than that.: 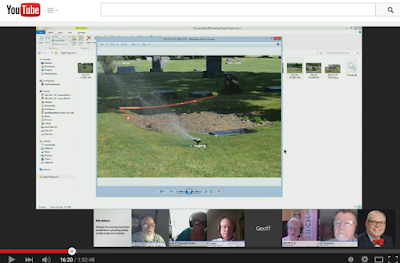