What Does SHE Say? Study Group Panelists thus far...

DearREADERS,
We've got one week before the debut of the four session What Does SHE Say? Study Group and we have some panelists to announce. We still need a few more. Don't be shy.


A returning panelist, +Lisa Gorrell describes her genealogy education background as self-taught by reading many genealogy handbooks, manuals, and blogs, and attending seminars, webinars, and week-long institutes. Graduate of ProGen21. Her research focus is on 19th and 20th Century Southern and Western US (with some Mid-western); German and Swedish. You'll find Lisa's comments practical and forward thinking. Glad to have you on the panel Lisa.

Our gal in Wales, +Hilary Gadsby says she is a self taught genealogist who regularly views online webinar. Regular attendees will remember Hilary from previous DearMYRTLE study groups. Hilary was a guest in our home as she traveled from Wales to Salt Lake City to attend Rootstech 2015. Her research focus is English record research, with 15 years of personal research experience. I think she could start taking clients.

+Cousin Russ Worthington, our technical adviser, says he learns  something new every day and that he hopefully shares some of that on a weekly basis. Me thinks he does share! We couldn’t do our DearMYRTLE hangouts without Ol’ Myrt’s real-life cousin. He’s a prolific blogger and video blogger, with a specialty in the use of Family Tree Maker software. 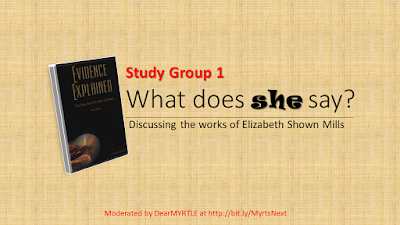 Noon Eastern US (New York)
11am Central US (Chicago)
10am Mountain US (Denver, Salt Lake City)
9am Pacific US (Los Angeles)

Where
This is where all may VIEW and post COMMENTS about each session. The post for each session will appear within the week prior to individual scheduled sessions here:
http://bit.ly/MyrtsNext