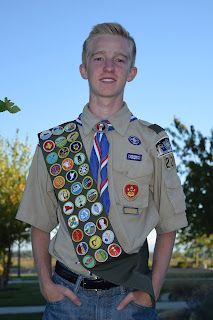 DearREADERS,
Remember that marvelous tombstone photo/transcription project organized and well-executed by Evan Rasmussen for his Eagle Scout Project? The very next day, one of the grave sites caved in and the tombstone toppled. Well, we are pleased to learn Evan has indeed passed his Board of Review and received the rank at his Eagle Court of Honor in late September.

EVAN'S EAGLE SCOUT PROJECT
Digitize the tombstones at the Greenleaf Cemetery near his home and garner public support to transcribe the text from each stone using the BillionGraves website and app for iOS and Droid smartphones. Find out more about Evan's project in his guest post on his father's genealogy blog located here: http://bit.ly/Evan_Greenleaf

DearMYRTLE'S RECOMMENDATION
As part of his Board of Review, Evan had to submit letters of recommendation from at least three individuals. I was honored to be asked to contribute, and this is the transcript:

To whom it may concern,

Having had the pleasure of interviewing your Eagle Scout candidate Evan Rasmussen through a video conversation about his cemetery tombstone transcription project, I recommend him highly. He has developed leadership skills extending beyond his peers to galvanize a community effort preserving history. Though faced with speaking before literally thousands tuning in to our Google Hangout, this young man cheerfully described the mechanics of his project, deftly handled spontaneous questions, and represented himself and Boy Scouting in a positive manner.

Cemetery walking isn’t something most teenagers are jumping at the chance to do. Perhaps influenced by his father’s interest in genealogy, Evan took things to the next level by independently creating the event, contacting the cemetery manager, training the volunteers in the use of the Billion Graves smart phone app, and setting his team on specific rows within the cemetery. As work progressed, he reassigned volunteers to a different part of the cemetery thereby avoiding duplication of transcriptions and ensuring no portion of the cemetery would be missed in this immense canvasing project.

The urgency of preserving tombstone inscriptions was underscored when the cemetery manager reported the very next day one of the grave sites caved in. She explained this is a frequent occurrence as gravesites age, and often tombstones fall and sadly, inscriptions crumble into oblivion. Without projects like Evan’s, a community’s history, its very heart and soul, will slip away and be forgotten.

As a member of the international genealogy community, serving as an educator and blogger, I’m painfully aware of the critical need to preserve ancestral gravesites. Tombstones are frequently the only evidence we have of a progenitor’s existence as paper documentation is a fragile medium.

I’m told the Eagle Scout award is the highest advancement rank in Boy Scouting and that to earn this rank, a scout must progress through lower ranks, earn specific merit badges, serve in a troop leadership capacity, and finally plan, develop and give leadership in a service project. Evan, in my estimation, qualifies.

It should be noted that during our live video interview, observed by people on five continents, one community member remarked she was having a conversation with her younger Boy Scout sons, who then pulled up and watched the balance of Evan’s interview. One son is now planning a similar project in his hometown. That’s leadership in action - when boys look to an older scout for inspiration.

I urge the members of Evan Rasmussen’s Eagle Scout Board of Review to consider he has met and in fact, exceeded requirements to receive this rank. He will surely honor your organization as an Eagle Scout.


AN EXAMPLE TO OTHER SCOUTS
Today, I've been talking with Evan's father, Geoff Rasmussen of Legacy FamilyTreeWebinars.com. Here's a screen shot of our communication and the link to join Evan's friend Lance's Eagle Project which began yesterday and extends through 1 Feb 2016. You can assist by transcribing some of tombstone pictures already uploaded to Billion Graves, thereby supporting another Eagle Scout candidate in this worthwhile endeavor. 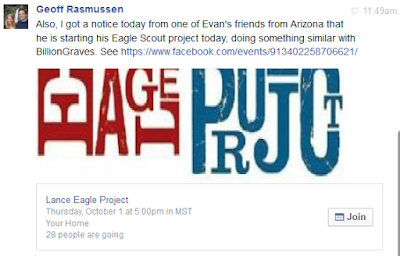 Oh, this younger generation - I just LOVE what they're up to!