The unintended consequence of canceling all hangouts for the week provided free time that Cousin Russ put to good use. He writes "While taking a break from “business as usual” I finally am taking some time to make sure that my files are organized." What followed was the rediscovery of previously un-scanned and un-transcribed letters from Robert M. Worthington to Cousin Frances in 1978. Robert references old tin boxes of papers and letters as he faces gaps of information in the jig-saw puzzle of their family history. Its priceless to read the reasoning behind Robert's differences of opinions about birth dates, etc. 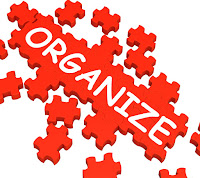 In a follow-up article What did I learn? Cousin Russ obviously revels in new-found knowledge, for instance, seeing Quakerisms filling the pages with specific language. There is the gathering of buffalo chips for the home fire. The hint of family discord among eleven siblings is balanced by Robert's joy when recognizing his father's handwriting.

We've seen Cousin Russ' detailed family history as he demonstrates how he uses Family Tree Maker. He has literally thousands of well-cited source documents collected over decades of research.

Yet, there are some files and tasks we've all set to the wayside, just like Cousin Russ. Let's get cracking on the FINALLY Get Organized Checklists found here.

Cousin Russ awesome discovery of these family letters has provided perhaps the best argument for going through everything we've already collected and FINALLY Get Organized! I wonder if the first-hand knowledge shared by Robert M. Worthington will change any of the "current thinking" Cousin Russ has about some of his ancestors?

Posted by DearMYRTLE on Thursday, January 21, 2016