NOTE from DearMYRTLE: As mentioned in Fairfax Genealogical Society: Annual Spring Conference 1-2 April 2016, DearMYRTLE and Cousin Russ will be presenting a track of four classes as follows.

Renowned for multiple live video hangouts weekly, including Mondays with Myrt and Wacky Wednesday, DearMYRTLE eschews the lecture format in favor of  the "home-work-first with panelist moderation format" in her Mastering Genealogical Proof and Genealogy and the Law and other study group sessions. Over 400 videos are archived on DearMYRTLE's YouTube Channel.
Online since 1985 in membership development with Q-Link's Your Family Tree and later on the leadership team of AOL's Golden Gate Genealogy Forum, Pat is a retired post-secondary computer instructor.  She and her husband live in South Jordan, Utah, happily combining their genealogy and history libraries following their marriage in 2009.
Blog: http://blog.DearMYRTLE.com 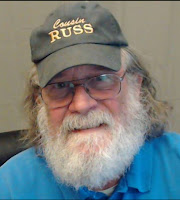 Cousin Russ is Russ Worthingon. Russ lives in the beautiful Northwest corner of New Jersey where there are no Exit numbers for the Garden State Parkway of the New Jersey Turnpike. He started "collecting his ancestors" about 20 years ago when his youngest daughter gave him a genealogy management software program as a gift to "give him something to do." Little did he know where this would lead him and the people he would meet. Russ enjoys helping others in their hunts and in building their family relationships. It's finding those Family Stories that are the most fun.
Friday, 1 April 2016
TRACK: Researching in the 21st Century – DearMMYRTLE and Cousin Russ
Time posted is in the Eastern US time zone.
Posted by DearMYRTLE on Wednesday, March 16, 2016