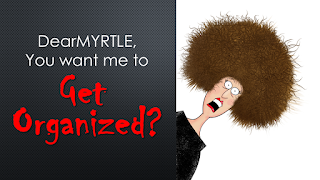 DearREADERS,
Did you know that March participants are eligible for a $250 Amazon Gift Card? Better get cracking. You must enter to win by completing the form here:  http://goo.gl/forms/nDggeWYgKR This week's checklist takes a closer look at the sources of documents and photos you have been attaching to the first four generations of male and female ancestors and their siblings and children in your genealogy software program. For paper-oriented genealogists, have you discovered some filing challenges? Read on...

1. Consider the differences between sources, information and evidence.  Are you drawing on the most original form of first-hand information? Certified Genealogists Elizabeth Shown Mills and Thomas W. Jones discuss these concepts in their published works and methodology presentations.

When selecting evidence to answer a specific research question like "What is this couple's marriage date?" it's a good practice to obtain direct evidence wherever possible. Occasionally, we are forced to rely on indirect evidence, though a written proof argument should be created to explain why we have made the decision to answer our research question with less than stellar information.

2. Organize your thoughts, "current thinking" as Cousin Russ calls it. Take the time to write a paragraph or more justifying your "current thinking" for each parent-child-spouse family relationship in your genealogy database. Do this for each event in an ancestor's life. This keeps you from having to rethink the conclusion, until perhaps additional sources of information come to light. We have previously reminded you to look at a series of DearMYRTLE Study Group sessions titled The Written Conclusion, based on Chapter 7 of Mastering Genealogical Proof cited above. It may help to study two of Elizabeth Shown Mill's posts:

REMEMBER:
We are only dealing with the first four generations, starting with yourself.
Though your compiled genealogy may contain more generations, we are working to learn correct research principles.

3. Start planning your summer vacation. Check to see which towns of interest to your ancestors are along the route. Make a point to stop by, even if the focus in now research. You will learn much about the lay of the land. For instance, during Ol' Myrt's 1995 research trip to Germans I noticed a striking similarity to the place of origin on the Nckar River valley (east of the Rhein River) and the Tupelhocken Valley of Pennsylvania where my Palatine immigrant ancestor eventually settled. The impact of that familiarity still brings tears to my eyes. The hills rolled about the same, and the familiar orange geraniums grew wild here and there along the roadside in both places.

4. Paper-oriented genealogists need not be confused when filing papers.  It's appropriate to file photos and documents mentioning a female before marriage in her maiden name binder, immediately following the family group sheet where she appears as a child with her parents. Once she is married, the marriage certificate, birth records of children, census records and family portraits are filed in her married name surname binder, after the group sheet where she appears as the spouse/parent in the family. Should she be widowed and subsequently remarried, that information would appear in the surname binder for her subsequent husband.

MARCH PARTICIPANTS are eligible for a $250 Amazon Gift Card, but must complete the form here:  http://goo.gl/forms/nDggeWYgKR

Want to Hangout?  We will be discussing this week's checklist during our Mondays with Myrt hangout. Here's the link to register using LinkedIn, Facebook, Twitter or Google+. http://hangouts.dearmyrtle.com/next-hangout.html Now everyone can view and comment. With my new hangout interface, you only need a Google account if you want to appear as a filmstrip panelist.

Here's the link to the calendar of other upcoming DearMYRTLE genealogy hangouts: http://hangouts.dearmyrtle.com/calendar.html

Check out all previous DearMYRTLE's Finally Get Organized! Checklists.