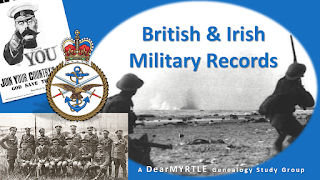 "Great session enjoyed it very much even if I was a day late to the party. It made me think I have military relatives that I hadn'€™t really considered before but who related to the British military. They include a member of the East Indian Army who eventually came to Australia. And another who served on a convict ship as part of the guard who would also have been part of military. And then there was the ancestor who went to sea leaving behind his wife, and became a merchant seaman, never to be seen again although two generations on we think we have settled in the US. Lots to learn. Really looking forward to next week. Thanks everyone."

Sure you *could* watch the video of this British and Irish Military Records Study Group session here or on YouTube, but you'll want to log in at:
http://hangouts.dearmyrtle.com/british---irish-military.html
so you can read all the comments and links posted before, during and after the live hangouts.