Get in on our nostalgic discussion about holiday traditions from our childhoods. Carol Petranek joined the panel to how explain her cousins in Greece think it somewhat odd that Greek emigrants want to come back to study their roots. Be sure to read her "Two Perspectives, One Heritage" posted her blog Spartan Roots (Σπαρτιατικές Ρίζες) Researching My Greek Genealogy and Family History. She explains "A Greek native has knowledge about his family; therefore, his motivation may be one of curiosity, not identity."  As she sees it, there is a disconnect between immigrant descendants, say in the US, and those remaining in Greece living in their great-grandfather's house on property that has been in the family for many more generations. Natives are living their history. The immigrant descendants 3-4 generations away from Greece are now reaching out trying to connect with the ancestral roots. This is met with almost a sense of suspicion by the Greek natives. "Genealogy isn't a Greek thing." The Greeks are living it.

Carol created two pyramids describing first how native Greek thinks his family fits into the greater history of the region. s versus the descendants of those who emigrated from look at genealogical research. The second pyramid discusses things from what we consider the "typical genealogist" looks at research.

Cousin Russ suggests an inverted pyramid in response to Carol's two pyramid. You'll want to get the context by viewing the hangout. Carol's blog post concludes:

Thankfully, the roots that unite us are stronger than the perspectives that divide us. 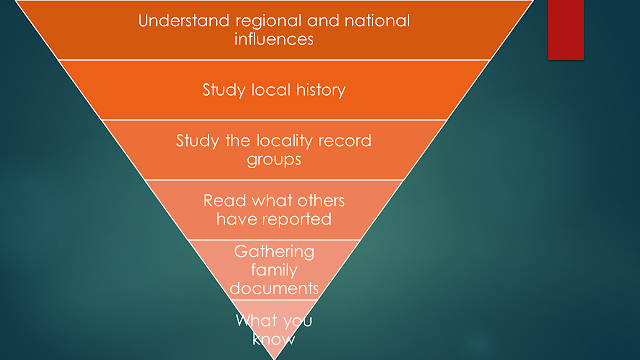 Sure, you may watch this DearMYRTLE hangout here on this post, or over on DearMYRTLE's YouTube channel, but why not view AND comment before, during and after over at:
http://hangouts.dearmyrtle.com/19-dec-2016-mwm.html