NOTE from DearMYRTLE: The following was received from our friends at MyHeritage.
New historical record collection: Norway Church Records (1815–1938).

The records in this collection were digitized in collaboration with the National Archives of Norway (Arkivverket), and consist of 42.2 million indexed records and high quality scans of the original documents. The records include births & baptisms, marriages, and deaths & burials. This release is the first time the collection’s images are fully indexed and searchable — making it easier than ever to research your Norwegian ancestors. The addition doubles the number of Norwegian historical records on MyHeritage and brings the total number of historical records on MyHeritage to 12.6 billion. 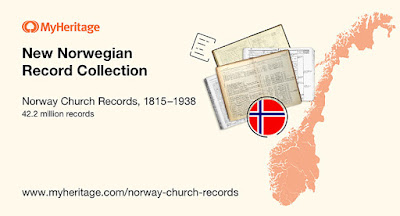 The records in this collection cover a critical period in Norway’s history, beginning just one year after its secession from Denmark. This important collection helps overcome the significant gaps in Norwegian censuses taken from 1801 to 1865. Five censuses were collected in Norway during those years, but they did not record names of individuals, making the church records the definitive source for genealogical data during that period.

In the Norway Church birth and baptism records, a child was often recorded with only his or her given name(s) without an expressly recorded surname, as it was assumed the child would take either a patronymic surname from their father or take a hereditary surname. To overcome the challenge of the missing surname, MyHeritage inferred two possible surname variations for each individual, so users can search for either the patronymic or hereditary surname to find the correct record. MyHeritage indexed the surname variations to make them discoverable, but the actual records were not modified, and the surnames were not inserted into them, to preserve their authenticity.

The Norway Church Records (1815–1938) collection is an indispensable resource for anyone who is looking to learn more about their Norwegian roots during this time period. With the release of this collection, MyHeritage now offers 80 million historical records from Norway, 57 million historical records from neighboring Sweden, and 107 million records from Denmark, positioning MyHeritage as the leader in Scandinavian family history research.