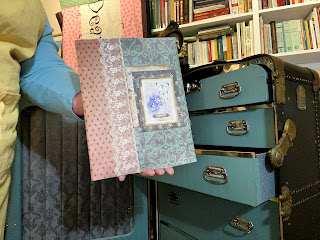 DearREADERS,
My maternal grandmother Myrtle Eliza (Weiser) Player Severinson had Lou Gehrig's Disease (ALS - Amyotrophic lateral sclerosis) in the final years of her life. Eventually she could not speak, so she used a "Magic Slate" to scribble a brief note and save paper.
My grandchildren are accustomed to 21st century communication tools like computers, smart phones and tablets. They play online video games with their friends. None have ever seen a "Magic Slate" so I found one. As a young child of the 1950s, I looked forward to receiving a new one every year from Santa Claus.
This journal telling the story has larger dimensions than my typical work for 52 THINGS. Don't you think my hi-tech grandchildren will get a kick out of seeing how a "Magic Slate" works?

If you cannot view the embedded video on your device, use this link: https://youtu.be/EYxDb9eP2zc
SD is replaced by HD and CC usually within the hour of upload.

OTHER 52 THINGS in this series are found here: https://blog.dearmyrtle.com/p/52-things.html