NOTE from DearMYRTLE: The following was just received from our friends at MyHeritage. 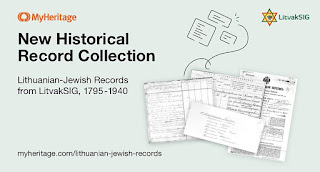 Tel Aviv, Israel and Lehi, Utah, March 9, 2021 — MyHeritage, the leading global service for discovering your past and empowering your future, and LitvakSIG, a U.S. non-profit organization providing the primary online resource for Lithuanian-Jewish genealogy research worldwide, jointly announced today the publication of an important compilation of Lithuanian-Jewish historical records by MyHeritage. The records in this collection were originally translated and indexed by LitvakSIG, and represent almost the entire corpus of LitvakSIG's work over more than twenty years. These records have now been added to MyHeritage's historical record database.

The Lithuanian-Jewish Records from LitvakSIG, 1795-1940 collection consists of several million historical records and covers the era from the Russian Empire (1795 to World War I) to the period of independent Lithuania (1919–1940). The majority of records are from places in present-day Lithuania. However, due to various geopolitical changes during the time period covered, the records are not limited to the modern boundaries of Lithuania; they also cover areas located in present-day Poland, Belarus, or other neighboring countries. The records in this compilation include vital records, census records, tax and voter lists, conscription lists, household registers, directories, emigration lists, and more.

These records have tremendous genealogical value, and together with MyHeritage’s search and matching technologies, which overcome language barriers and provide matches to family trees in English, Russian, and Hebrew, among other languages, will open a new frontier of discovery for individuals who are researching their Lithuanian-Jewish heritage. MyHeritage is home to a treasure trove of Jewish historical records. In addition, the company’s collections include millions of pages from passenger and immigration lists documenting the wave of emigration from Europe to North America, South America, and Israel in the aftermath of the Holocaust.

“This year we are increasing our efforts to expand the Jewish genealogy resources on MyHeritage,” said Gilad Japhet, Founder and CEO of MyHeritage. “Adding this collection from LitvakSIG provides a valuable resource for anyone of Lithuanian-Jewish origin. On a personal level, some of my own ancestors appear in this collection, including my paternal grandmother and her siblings from the small Lithuanian town of Valkininkai (Olkieniki), making this addition especially meaningful for me and my family.”

“We are excited to make the bulk of LitvakSIG’s translated historical records available to millions of MyHeritage users,” said Jill Anderson, President of LitvakSIG. “By allowing this collection to be searchable on the MyHeritage platform, LitvakSIG is fulfilling its mission to promote widely Lithuanian-Jewish (Litvak) genealogical research. This arrangement will enable LitvakSIG to accelerate the pace of publishing new records, which will be added to the collection on MyHeritage in the future.”

The Lithuanian-Jewish Records from LitvakSIG collection is available on MyHeritage. Searching the collection is free. A subscription is required to view the full records and to access Record Matches.