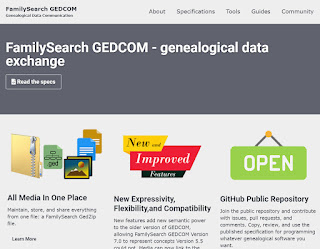 DearREADERS,
Today within minutes of Tony Proctor's arrival to Mondays with Myrt, he received notification that GEDCOM 7.0 has been released. See: https://gedcom.io/
GEDCOM is a generic file format that can be employed to export and import genealogy data between genealogy programs and websites. Now we just need genealogy websites and software developers to adopt GEDCOM 7.0.

Louis Kessler and Tony discussed some of the welcome improvements included in this open source software designed to facilitate data communication between various genealogy software programs and websites.

A breakthrough in technology for genealogists who wish to share all data, images AND sources. Now the genealogy website and software developers must embrace the new standards. No more lost source citations! :)

Randy Seaver reported that Bruce Buzbee of RootsMagic.com plans to implement GEDCOM 7.0 within the month.

UPDATE from RootsMagic's Michael Booth who explains here is our official statement:

"Today, FamilySearch released the official specifications for GEDCOM 7.0, the standard file format for transferring and archiving genealogical data. With many others, we've played a part in guiding the development of GEDCOM 7.0.

Since it was just officially released today, it may take some time to add support for GEDCOM 7.0 to our different products. We have no official timetable for when it will be available or what specific features we plan to add.

You may learn more about GEDCOM 7.0 at https://gedcom.io"