Renowned for multiple live video hangouts weekly, including Mondays with Myrt and Wacky Wednesday, DearMYRTLE eschews the lecture format in favor of  the "home-work-first with panelist moderation format" in her Mastering Genealogical Proof and Genealogy and the Law and other study group sessions. Over 400 videos are archived on DearMYRTLE's YouTube Channel.

A speaker at regional and national conferences including live videocasts at RootsTech2011 and 2012, Myrt is co-founder of the Genea-Quilters group on Facebook, and founder of www.GeneaWebinars.com, a centralized calendar and blog for all known genealogy webinar hosts and virtual presenters.  Myrt is also an active member of the Second Life (SL) Chapter of the Association of Professional Genealogists, and coordinator of SL's Just Genealogy including the Inferential Genealogy Study Group.

Online since 1985 in membership development with Q-Link's Your Family Tree and later on the leadership team of AOL's Golden Gate Genealogy Forum, Pat is a retired post-secondary computer instructor.  She and her husband live in South Jordan, Utah, happily combining their genealogy and history libraries following their marriage in 2009.

MORE THAN  YOU WANT TO KNOW 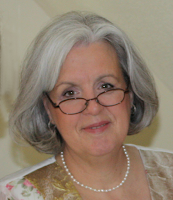 Author: Beginning in 1995, DearMYRTLE's Daily Genealogy Column appeared in the Golden Gate Genealogy Forum on AOL until AOL folded the forum in Sept 2003. DearMYRTLE.com debuted in 1999 as a place to archive special columns for access by anyone on the net. Myrt's The Everything Online Genealogy Book debuted in Nov 2000 followed by DearMYRTLE's Joy of Genealogy in 2006. Myrt has written numerous magazine articles, published in Heritage Quest Magazine and Everton's Genealogical Helper. She wrote the chapter on church records for Family Chronicle's Introduction to Genealogy. In March 2003, Myrt began her series of "little books", including Getting Started with Your Family History and Internet Research: Top 20 Things to Do Online. Currently DearMYRTLE's Genealogy Blog is rated one of the top five in the industry.

Computer Instructor: From 1991-2006, Pat taught computer classes at the Manatee Technical Institute with an emphasis on corporate training. She also provided computer tutoring services in Sarasota and Manatee county, Florida. Specialties include corporate and government training in Windows, Excel, Access, PowerPoint and; Outlook.

Public Speaker: Myrt has been featured as the keynote speaker and presenter at numerous genealogy conferences in the US and abroad. As DearMYRTLE, Pat has spoken at national, regional & local genealogy society meetings since the late 1990s. She has spoke at the 1996 NGS Conference in Nashville, Tennessee, giving 2 computer lab training sessions.  Recently Myrt presented three lectures and participated in 2 panel discussions at RootsTech 2011.

Genealogy Training and Service: Pat received training at the Washington, DC Temple Family History Center in Kensington, and served for five years as the Patron Services Librarian at the Family History Center in Bradenton, FL. She has spent hundreds of hours researching at the National Archives, the Library of Congress and the DAR Library in Washington, DC. In addition, Myrt now resides in the Salt Lake City area, facilitating intensive research at the Family History Library. She has attended Salt Lake Institute of Genealogy for four years, and Samford University's IGHR - Advanced Military Records II. Myrt is currently a participant in ProGen12, is registered for Samford 2012 - Advanced Military Records III.

Chat Room Hostess: Myrt joined the Your Family Tree on Q-Link for Commodore computers in the winter of 1984/1985. Working with Russ Kyger, they expanded the chats from 1 to 7 week nightly. She remembers begging Russ to hire the talented Terry Ann Morgan as the message board host. Q-Link and Apple-Link merged to become AOL, where Myrt served on the leadership team of the Golden Gate Genealogy Forum (AOL's Keyword: roots) until it was disbanded in August 2003. You'll find Myrt in Second Life hanging out as Clarise Beaumont at Just Genealogy.

Pat/Myrt lives in Utah with five computers, 112 research notebooks and enough shelves to finally unpack her genealogy library. She married Gordon L. Erickson, a member of the Federation of Genealogical Societies Board, and active conference chair of the Fairfax (VA) Genealogical Society who conveniently lived in Alexandria, Virginia, just a short Metro ride to the National Archives, Library of Congress, NSDAR Library and other research facilities.